The Muslim Brotherhood in Central Ohio

The Investigative Project on Terrorism reports from the Holy Land Foundation HAMAS terror financing trial in Dallas that during testimony yesterday an FBI agent was questioned regarding a Muslim Brotherhood phone directory showing the terror organization’s US leadership (“Muslim Brotherhood Phonebook Confirms that MAS is Brotherhood’s Baby”).

A quick look at the Muslim Brotherhood directory shows that one member of their board of directors at the time (1992) was located right here in Columbus (in the 614 area code): 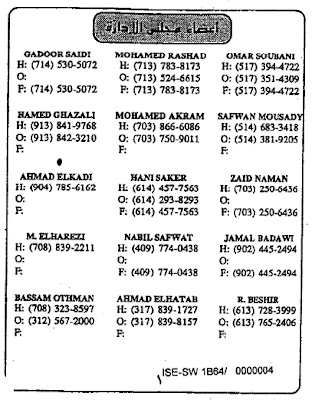 The office number for Hani Saker/Shaker is an Ohio State University phone number that currently goes to the OSU Department of Orthopedics, but additional information on Saker’s past/present relationship to OSU will need to be the subject of further research.

It has been known that the Muslim American Society (MAS) organization was the ideological training operation for the Muslim Brotherhood in the US, especially after a September 2004 Chicago Tribune exposé on MAS, “A rare look at secretive Brotherhood in America”, featured an interview with Ahmad Elkadi, who worked with current international Muslim Brotherhood General Guide Mahdi Akef to found the organization here and served as the leader in the US for several years in the 1970s and 1980s. Elkadi and other MAS officials admitted their relationship to the mothership of Islamic terrorism and extremism. These new documents and testimony in the Holy Land Foundation trial support this prior evidence about the role of MAS as an arm of the international Muslim Brotherhood. Counterterrorism expert Matthew Levitt has already testified in the trial about the MAS-Muslim Brotherhood connection.

For those not familiar with the Muslim Brotherhood, its credo is: “Allah is our objective, the Koran is our Constitution, the Prophet is our leader, jihad is our way, and death for the sake of Allah is the highest of our aspirations”, and it has spawned virtually every single Islamic terror organization in the world today. It’s chief theorist, Sayyid Qutb, articulated the jihadist ideology that undergirds the present global jihad, and the graduates of the Muslim Brotherhood include Osama bin Laden, Ayman Al-Zawahiri, Khalid Sheikh Mohammad, 1993 WTC bomber Ramzi Youssef, 9/11 leader Mohammad Atta, et al.

The MAS-Columbus affiliate has been one of the more important groups in the national organization. So important, in fact, that Muslim Brotherhood operative Salah Sultan made Central Ohio (specifically, Hilliard) his home. Sultan was a MAS board member from 2000-2004, he worked for the group at the head of their Tarbiyah department in the late 1990s, and was the founder of the Islamic American University in Michigan, where he installed his mentor and Specially Designated Global Terrorist Yousef al-Qaradawi as honorary chairman. So important was this major Muslim Brotherhood figure’s move to Columbus, that MAS-Columbus posted a major annoucement heralding Sultan’s arrival on their website (archived copy).

Another prominent member of the MAS-Columbus group is none other than my good friend, Ahmad Al-Akhras. When he was appointed to the Leadership Columbus Hall of Fame, MAS-Columbus again posted the announcement on their website, crowing that a MAS member had been chosen for such an honor.

Ahmad Al-Akhras, vice chairman of the Council on American-Islamic Relations and close advisor to Columbus Mayor Michael Coleman, a member of the Muslim Brotherhood? Say it isn’t so, Joe!

The day before MAS-Columbus posted that announcement regarding Al-Akhras, it published an article entitled, “Palestine: Is it the Jews’ Promised Land?”. Believe it or not, it concludes that it isn’t. I know you are staggered in disbelief. In conclusion, it states:

Though, seizing the chance of Muslims’ lapsing in weakness and deviating from Allah’s teachings, the Jews have occupied Palestine, they will never remain there forever, for the evil within themselves is beyond description. They will suffer another defeat and sever blow; we hope this will be at the hands of Muslims once they return back to their Lord and be unified again.

The Muslim Brotherhood in Central Ohio? The documents don’t lie, even though its members do.
Patrick Poole at 1:10 AM
‹
›
Home
View web version